Pesticides Incorporated into Fabrics and Housewares Are Hazardous, and Not Adequately Regulated
December 13, 2021

Successes of the Past Help Meet Challenges of the Future: Have a Healthy New Year
December 24, 2016

FDA Bans Antibacterial Pesticide Triclosan in Soaps, While EPA Allows Its Use in Common Household Products and Toys
September 6, 2016 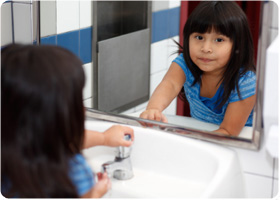 Triclosan, one of the most prevalent antibacterial compounds found in products, is the focus of a campaign undertaken by a coalition of health and environmental groups led by Beyond Pesticides and Food & Water Watch, aimed at removing triclosan from the market. Over the last few years, as a direct result of pressure from consumer groups and the media regarding the need for triclosan in consumer products and the mounting scientific evidence documenting adverse health effects, including impacts to the thyroid hormone, major manufacturers have quietly reformulated their products without triclosan.

Studies have increasingly linked triclosan (and its chemical cousin triclocarban), to a range of adverse health and environmental effects from skin irritation, endocrine disruption, bacterial and compounded antibiotic resistance, to the contamination of water and its negative impact on fragile aquatic ecosystems.

When introduced to the market in 1972, triclosan was confined to hospital and health care settings. Since then triclosan exploded onto the market place in hundreds of consumer products ranging from antibacterial soaps, deodorants, toothpastes, cosmetics, fabrics, toys, and other household and personal care products. Triclosan’s success on the consumer market has been aided by the false public perception that antibacterial products are best to protect and safeguard against potential harmful bacteria. However, an article in the journal Clinical Infectious Diseases, entitled "Consumer Antibacterial Soaps: Effective or Just Risky?" (2007), concludes that antibacterial soaps show no health benefits over plain soaps. In 2010, FDA stated that, “Existing data raise valid concerns about the [health] effects of repetitive daily human exposure to [triclosan]” and announced plans to address the use of triclosan in cosmetics or other products.