Glyphosate-Based Herbicides and Sustainable Agriculture Do Not Mix!
April 29, 2021

Over 100 Chemicals Detectable in Pregnant Women, Including 98 “New” or Unknown Compounds
March 25, 2021 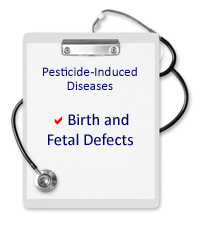 In 2005, the births of three babies born in Florida with severe birth defects to mothers who all worked for Ag-Mart Produce, a company that produces chemically-treated tomatoes and other agricultural products, brought the connection between birth defects and pesticide exposure into the public consciousness. Birth defects are structural or functional abnormalities present at birth that cause physical or mental disabilities, ranging from mild to fatal. Researchers have identified thousands of different types of birth defects. Currently, birth defects are the leading cause of death for infants during the first year of life.