Hazards of Pesticides for Children’s Health 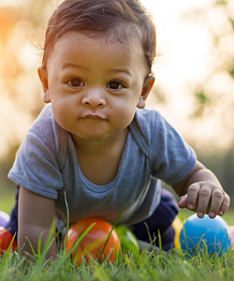 Children face much higher hazards than adults from pesticide exposure. Their small size and developing organ systems, propensity to crawl and play near the ground, tendency for frequent hand to mouth motion, and greater intake of air and food relative to body weight make them particularly susceptible. Many of these risks start before a child is born, indicating the need for pregnant mothers to take particular care to avoid contact with hazardous pesticides.

The probability of an effect such as cancer, which requires a period of time to develop after exposure, is increased if exposure occurs early in life, during what scientists have coined “critical windows of vulnerability.”

The hazards borne by children in these “windows of vulnerability” have critical implications for long-term health. One of the most important windows is preconception exposure – with risks ranging from birth defects to cancer. 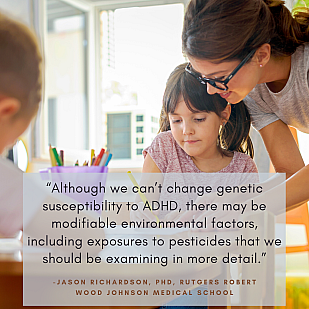 Jason Richardson, PhD, associate professor in the Department and Environmental and Occupational Medicine at Rutgers Robert Wood Johnson Medical School said of this study, “Although we can’t change genetic susceptibility to ADHD, there may be modifiable environmental factors, including exposures to pesticides that we should be examining in more detail.”Speaking in reference to a report published in the journal Endocrinology in 2015, Phillipe Grandjean, MD, professor of environmental health at Harvard T.H. Chan School of Public Health, said in a statement, “Unfortunately, current testing paradigms do not properly assess the impact of risk factors during vulnerable exposure windows. Without new policies and guidelines, we cannot have a universal healthy start for children.”

Find out more about the link between pesticide exposure and diseases that stress health, education, and social care systems, and family budgets by viewing Beyond Pesticides Daily News archives on Children and Schools and the Pesticide Induced Diseases Database.

You can also hear the science behind the hazards pesticides pose to children’s health straight from the experts. Watch the videos below from Beyond Pesticides National Pesticide Forum:

"Health Effects of Pesticide Use: Children and the Community"

"Protecting Family Health and the Environment"