What Is a Pesticide? 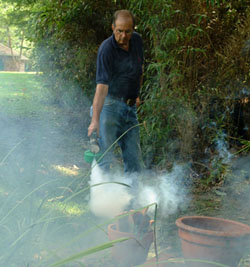 According to the Environmental Protection Agency (EPA), the government body that regulates pesticides in the U.S., a pesticide is any substance or mixture of substances intended for preventing, destroying, repelling or mitigating any pest. Though often misunderstood to refer only to insecticides, the term pesticide also applies to herbicides, fungicides, and various other substances used to control pests. Pesticides also include plant regulators, defoliants and desiccants.

Learn about the health and environmental effects of specific pesticides, as well as alternatives, in the Pesticide Gateway.

What's in a Pesticide Product?

We normally think of a pesticide as the product that can be purchased in the store – the insecticide, the weed killer or the fungicide. But, unfortunately, there is much more to it than that. The product that you buy or are exposed to is actually a pesticide formulation that contains a number of different materials, including active and inert ingredients, as well as contaminants and impurities. In addition, pesticides, when subject to various environmental conditions, break down to other materials known as metabolites, which are sometimes more toxic than the parent material.

The active ingredient, usually the only component of the formulation listed on the pesticide label, is by nature biologically and chemically active against a target pest, be it an insect, weed or fungus. By definition these chemicals kill living things.

Contaminants and impurities are often a part of the pesticide product and responsible for product hazards. Dioxin and DDT have been identified as contaminants, which have not been purposefully added but are a function of the production process.

Metabolites are breakdown products that form when a pesticide is used in the environment and mixes with air, water, soil or living organisms. Often the metabolite is more hazardous than the parent pesticide. 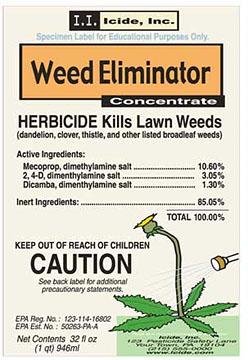 If you were to go to your local hardware store and take a look at the label on a can of ant and roach killer, the contents might read something like this, “5% Permethrin, 95% Inert Ingredients.” After reading the label, you may wonder what makes up the other 95%. The fact is, the manufacturer doesn’t have to tell you. Currently, under the Federal Insecticide, Fungicide and Rodenticide Act (FIFRA), pesticide manufacturers are only required to list the active ingredients in a pesticide, leaving consumers and applicators unaware of the possible toxics present in the inert ingredients of pesticide products they are using, unless the EPA administrator determines that the chemical poses a public health threat. Pesticide manufacturers argue they cannot release information on inert ingredients because they are trade secrets, and if released, their products could be duplicated. Quite often inert ingredients constitute over 95% of the pesticide product. Inert ingredients are mixed into pesticides products as a carrier or sticking agent, and are often as toxic as the active ingredient.

The Hazards of Inert Ingredients

Despite their name, these ingredients are neither chemically, biologically or toxicologically inert. In general, inert ingredients are minimally tested, however, many are known to state, federal and international agencies to be hazardous to human health. For example, the U.S. government lists creosols as a “Hazardous Waste” under Superfund regulations, yet allows these chemicals to be listed as inert ingredients in pesticide products. Creosols are known to produce skin and eye irritations, burns, inflammation, blindness, pneumonia, pancreatitis, central nervous system depression and kidney failure.