Researchers Find Nonchemical Biological Control When "Tree of Heaven" Is Being Managed
December 22, 2021

Ecological Mystery Unravels, With Toxic Pesticide Use at the Center
May 12, 2021 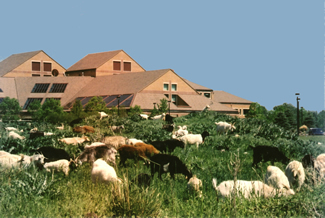 In 1941, North America contained a wide diversity of ecosystems and human cultures. Today, the landscape is more homogeneous. Most of the prairie is gone, replaced by large areas of monocultures of corn, wheat, or soybeans. The Eastern forests have been largely decimated by municipal, commercial, and residential development; this trend has affected much of the rest of the continent, as well. Cultures have been diminished; species are becoming extinct at an alarming rate.

Other changes have occurred, as well. The replacement of diverse ecosystems with monocultures and concrete has been accompanied by disturbances that create new habitats. As people have moved around, they have carried with them — sometimes unwittingly, sometimes purposefully — plants and animals from their former homes. When the habitat suits the new plant or animal, it happily makes itself at home.

When these new inhabitants interfere with what we humans want to do, we call them “pests” or “weeds.” There are some  weeds that seem to be especially difficult to manage — particularly those that have become established in “natural” or managed ecosystems.

Are these species “invasive?" Or are they opportunists taking advantage of disturbed ecosystems? When, if ever, should we mount campaigns to eradicate these species in their adopted homes? David Pimentel, PhD argues that alien weeds pose serious problems for agricultural and natural ecosystems. Virginia Daley and Fritzi Cohen argue that humans have always assisted the spread of plants wherever they have moved, and that the current hype over “invasive plants” is an excuse to mount chemical warfare campaigns. Either way, toxic chemicals are not an answer, but in fact, pose greater threats than the problems they are meant to solve. Read this Harper's Magazine article for an interesting take on Monsanto, glyphosate, and the war on invasive species.

There are many other approaches to managing problem vegetation that have proved successful. As can be seen in the following descriptions of other strategies, successful land management needs to consider the whole system.

Every year, millions of miles of roads, utility lines, railroad corridors, and other types of rights-of-way are treated with herbicides to control the growth of unwanted plants. However, public concern over the use of dangerous and inadequately tested pesticides has resulted in increasing efforts to enact state laws and local policies requiring notification of pesticide use, restrictions on application types, and implementation of least-toxic and organic approaches to vegetation management. For more information on what your town can do, read Beyond Pesticides’ "The Right Way to Vegetation Management."

An example of community advocating against these pesticide uses is Cape Cod. After four years of relying on nontoxic mechanical controls to clear weeds on rights-of-way across Cape Cod, the Massachusetts-based power company Nstar (now Eversource) announcedthat it would begin using herbicides again in 2013. All 15 Cape Cod towns signed a no-spray resolution in 2011 and 2013, requesting that NStar use non-chemical means to defoliate transmission line easements, citing concerns for pesticide drift into the ground and surface water. Yet, despite extensive local opposition to the spraying, and evidence of the efficacy of organic land management to control weeds, NStar refused to consider alternative methods to spraying toxic herbicides.

Read Beyond Pesticides’ comments to the Massachusetts Department of Agricultural Resources (MDAR) on NStar’s 2014 spray plan.