New Mexico Bill Will Protect Children from Toxic Pesticides Where They Learn and Play
February 11, 2021

Research Shows Greenspace and Biodiversity Protect Kids from Asthma
May 17, 2018

California Tightens Pesticide Limits on Strawberries and Other Crops
January 16, 2015 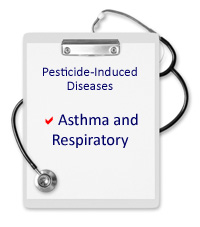 In the U.S., over 25 million people live with asthma, over 14 million individuals live with COPD, and millions of individuals live with lung cancer. The increasing rate of respiratory pathology, since the 1980s, demonstrates a need for better environmental policies and protocols surrounding contaminants like pesticides. Exposure to pesticides increases incidents of respiratory pathologies (i.e., asthma, lung cancer, and chronic obstructive pulmonary disease [COPD]—or chronic bronchitis). The respiratory system is essential to human survival, regulating gas exchange (oxygen-carbon dioxide) in the body to balance acid and base tissue cells for normal function. However, damage to the respiratory system can cause a plethora of issues—from asthma and bronchitis to oxidative stress that triggers the development of extra-respiratory manifestations like rheumatoid arthritis and cardiovascular disease. Therefore, the rise in respiratory illnesses over the last three decades years is highly concerning, especially as research fails to identify an exact cause for the increase in respiratory disease cases.

Asthma is a serious chronic disorder, and in some cases life-threatening disease, of the lungs characterized by recurrent attacks of bronchial constriction, which cause breathlessness, wheezing, and coughing. Researchers have found that pesticide exposure can induce a poisoning effect linked to asthma. Low-income populations, people of color, and children living in inner cities experience disproportionately high morbidity and mortality due to asthma. According to the National Institutes of Health’s National Institute of Allergy and Infectious Disease, African Americans are four to six times more likely than whites to die from asthma. Therefore, any time our policies allow regulators to permit uses of pesticides with known asthma effects, which is done daily, a disproportionate impact is felt in the African-American community. Among other policies, this toxics policy contributes to a cycle of poverty, as asthma is the leading cause of school absenteeism due to chronic illness. Learn more about pesticides and asthma.