Time Running Out To Save the Manatees, Effort Launched to Classify Them as Endangered
December 5, 2022

Life On or Near Chemical-Intensive Farms Associated with Increase in Respiratory Diseases
November 4, 2022 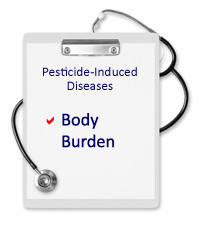 Most people are unaware that they carry chemical compounds in their bodies. Chemical 'Body Burden' refers to the accumulation of synthetic chemicals found in pesticides, cosmetics, industrial solvents, heavy metals, etc in our bodies. At any given time, hundreds of chemicals can be found in blood, urine, breast milk and even umbilical cord blood. Many of these chemicals enter our bodies through the foods we eat or drink, products we put on our skin and air we breathe. Before birth, people normally carry a body burden inherited from their mothers. Scientists believe the typical human being hosts close to 500 chemicals in various compartments in the body, mostly in fatty tissue. Many chemicals are broken down in our bodies and their metabolites are eliminated, but others linger in our bodies for a lifetime and can increase our risk for certain diseases such as cancer and Parkinson's disease.

Over the past decade, agencies like the Center for Disease Control and Prevention (CDC) have been tracking chemical burden in the general public by analyzing blood and urine. Termed "biomonitoring," it is considered to be the most health-relevant assessment of exposure because they "measure the amount of the chemical that actually gets into people, not the amount that may get into people." Since 2001, CDC releases its "National Report on Human Exposure to Environmental Chemicals" which documents the environmental chemical exposure in the U.S. population.

Despite the abundance of epidemiological evidence concerning the association between pesticide exposure and adverse health outcomes including acute childhood leukemia (AL), evidence remains inconclusive, and is inherently limited by heterogeneous exposure assessment and multiple statistical testing. We performed a literature search of peer-reviewed studies, published until January 2021, without language restrictions. Summary odds ratios (OR) and 95% confidence intervals (CI) were derived from stratified random-effects meta-analyses by type of exposure and outcome, exposed populations and window of exposure to address the large heterogeneity of existing literature. Heterogeneity and small-study effects were also assessed. We identified 55 eligible studies (n = 48 case-control and n = 7 cohorts) from over 30 countries assessing >200 different exposures of pesticides (n = 160,924 participants). The summary OR for maternal environmental exposure to pesticides (broad term) during pregnancy and AL was 1.88 (95%CI: 1.15–3.08), reaching 2.51 for acute lymphoblastic leukemia (ALL; 95%CI: 1.39–4.55). Analysis by pesticide subtype yielded an increased risk for maternal herbicide (OR: 1.41, 95%CI: 1.00–1.99) and insecticide (OR: 1.60, 95%CI: 1.11–2.29) exposure during pregnancy and AL without heterogeneity (p = 0.12–0.34). Meta-analyses of infant leukemia were only feasible for maternal exposure to pesticides during pregnancy. Higher magnitude risks were observed for maternal pesticide exposure and infant ALL (OR: 2.18, 95%CI: 1.44–3.29), and the highest for infant acute myeloid leukemia (OR: 3.42, 95%CI: 1.98–5.91). Overall, the associations were stronger for maternal exposure during pregnancy compared to childhood exposure. For occupational or mixed exposures, parental, and specifically paternal, pesticide exposure was significantly associated with increased risk of AL (ORparental: 1.75, 95%CI: 1.08–2.85; ORpaternal: 1.20, 95%CI: 1.07–1.35). The epidemiological evidence, supported by mechanistic studies, suggests that pesticide exposure, mainly during pregnancy, increases the risk of childhood leukemia, particularly among infants. Sufficiently powered studies using repeated biomarker analyses are needed to confirm whether there is public health merit in reducing prenatal pesticide exposure.
[Karalexi, M.A., Tagkas, C.F., Markozannes, G., Tseretopoulou, X., Hernández, A.F., Schüz, J., Halldorsson, T.I., Psaltopoulou, T., Petridou, E.T., Tzoulaki, I. and Ntzani, E.E. Environmental Pollution, p.117376.]

Exposure to various pesticides, such as pyrethroids and chlorpyrifos, has been previously associated with adverse effects on children's health. Scientific evidence on the human toxicity of glyphosate (GLY) and its primary metabolite, aminomethylphosphonic acid (AMPA) is limited, particularly for children. This study aimed to i) assess the exposure determinants of the studied pesticides measured in children in Cyprus, and ii) determine the association between the urinary pesticides and the biomarkers of DNA and lipid oxidative damage.

A children's health study was set up in Cyprus (ORGANIKO study) by aligning it with the methodology and tools used in the European Human Biomonitoring Initiative (HBM4EU). Urinary GLY and AMPA, pyrethroid metabolites and the chlorpyrifos metabolite TCPy were measured in 177 children aged 10–11 years old, using mass spectrometry. Oxidative stress was assessed with 8-iso-prostaglandin F2a (8-iso-PGF2α) as a marker of lipid damage and 8-hydroxy-2′-deoxyguanosine (8-OHdG) as a DNA oxidative damage marker, both measured with immunoassays. Questionnaires about demographic characteristics, pesticide usage, and dietary habits were filled out by the parents. Μultivariable regression models examined associations between pesticides and biomarkers of effect using two creatinine adjustments (cr1: adding it as covariate and cr2: biomarkers of exposure and effect were creatinine-adjusted).

Parental educational level was a significant predictor of urinary pyrethroids but not for GLY/AMPA. Median [interquartile range, IQR] values for GLY and AMPA were  0.05). Similar significant associations with 8-OHdG were shown for a pyrethroid metabolite (3-PBA) and the chlorpyrifos metabolite (TCPy). No associations were observed between the aforementioned pesticides and 8-iso-PGF2α (p > 0.05).

This is the first children's health dataset demonstrating the association between AMPA and DNA oxidative damage, globally. More data is needed to replicate the observed trends in other children's populations around the globe.

Urine and Other Compartments