Take Action: To Protect Children, EPA Must Decide Based on Science, Not Industry Lobbying
August 12, 2019

Two Hundred Million Pounds of Toxic Pesticides Used in California, According to 2016 Annual Data
May 22, 2018

Hawaii Bans Chlorpyrifos, First in the Nation
May 3, 2018 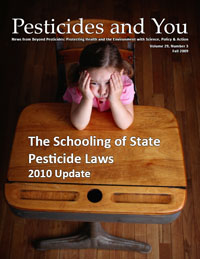 Children face unique hazards from pesticide exposure. In the food they eat and the air they breathe, children take in greater amounts of pesticides (relative to their body weight) than do adults, and their developing organ systems are often more sensitive to toxic exposures than those of adults. The U.S. Environmental Protection Agency (EPA), the National Academy of Sciences, and the American Public Health Association, among others, have voiced concerns about the danger that pesticides pose to children. The body of evidence in scientific literature shows that pesticide exposure can adversely affect a child's neurological, respiratory, immune, and endocrine system, even at low exposure levels. Several pesticides, such as pyrethrins and pyrethroids, organophosphates, and carbamates, are also known to cause or exacerbate asthma symptoms. See Select Studies on Pesticides and Children's Health.

The Schooling of State Pesticide Laws, 2010 Update examines the patchwork of states' school pesticide laws, and demonstrates the need for a federal law.

Beyond Pesticides' Healthy Schools Project  aims to create a more healthful learning environment for children. It seeks to minimize and eliminate the risks posed by pesticides through the adoption of school pest management policies and programs at the local, state, and federal levels. Central to this effort are activities aimed at public education on pesticide hazards and efficacy of alternatives, and the continued development of model communities that serve as examples.

There are recognition, and growing concern, among school administrators, staff, and parents regarding the mounting evidence that pesticides pose a public health hazard. The consequent commitment to nontoxic options and implementation of safer pest management practices — by 27 school districts and schools in 19 states — is documented in Safer Schools: Achieving a Healthy Learning Environment through Integrated Pest Management, a report by the School Pesticide Reform Coalition and Beyond Pesticides. Written by a broad group of individuals representing advocacy groups, state agencies, pest control companies, and school staff, the report encourages schools, states, and the federal government to adopt safer pest management programs for schools and communities.

Safer Schools provides comprehensive details of an integrated pest management (IPM) program by: (1) explaining what an IPM program is and why it is necessary; (2) highlighting 27 school districts and individual school IPM policies and programs; and, (3) outlining the basic steps to getting a school IPM program adopted. The report also includes a list of organizations, pest management companies, and government and school contacts that can provide a wealth of information on adopting a school IPM policy and its implementation; a list of states and schools that have an IPM/pesticide policy; and, a pest prevention strategies checklist. Whether it is advocating for Fedeal legislation such as the School Environment Protection Act (SEPA), which was unfortunately not enacted, or local and state policies, having examples of existing and economically feasible programs is critical.

For more information, see the latest news on children's health and pesticide use in schools, information on childhood asthma, current state/local policies, model laws and policies to pass in your community, and information on alternatives to pesticides, including integrated pest management. See also alerts, media (PSAs and press releases), publications (reports, factsheets and more), and organizational resources.

Federal legislation is needed to protect children from toxic pesticides used in and around schools. Ask your congressional delegation to introduce an updated bill modeled on the School Environment Protection Act (SEPA) of 2012.