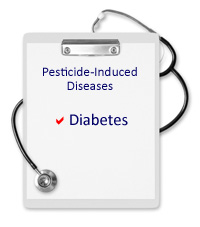 According to the American Diabetes Association, diabetes is a group of diseases characterized by high blood glucose levels that result from defects in the body’s ability to produce and/or use insulin. Type 1 diabetes is usually diagnosed in children and young adults. In type 1 diabetes, the body does not produce insulin. Type 2 diabetes is the most common form of diabetes and is most common in communities of color and the aged population. In type 2 diabetes, either the body does not produce enough insulin or the cells ignore the insulin. Pesticides and other environmental factors are almost always linked to type 2 diabetes.