Organic integrity can only be maintained through contant public pressure and involvement. Check back often as Beyond Pesticides works to keep the public informed on the lastest actions concerned citizens can take to protect the organic brand.

On September 16, 2013 USDA announced a sweeping new policy concerning the National Organic Program's sunset policy, which governs the process by which synthetic substances are periodically reviewed.

Speak out on Antibiotics and Fish Farming (and more) by October 1, 2013.

Don’t let USDA stop your voice from being heard on organic. The meaningfulness of the USDA organic label is threatened because the standards and public oversight governing organic are under attack.

Say No to Antibiotics in Organic Fruit Production 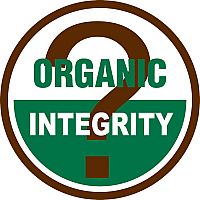 Help us make sure that the last antibiotic, streptomycin, is taken out of organic apple and pear production. Public action in spring 2013 resulted in a decision by the National Organic Standards Board (NOSB) to support the phase out of tetracycline. With resistance to antibiotics rampant, organic should be helping to solve the problem.

On fish farming or aquaculture, we don’t want intensive operations that pollute the environment and are not defined by organic systems that are protective of the aquatic environment. Let’s not let the NOSB approve synthetic chemicals that are used in factory fish farms without clear organic standards.

Go to Beyond Pesticides Keeping Organic Strong webpage to learn more about these issues and provide a unique public comment.

Protecting the Public’s Voice in Organic

USDA has weakened the power of the NOSB and the voice of the public on the review and approval of synthetic and other materials under the Organic Foods Production Act (OFPA). When you provide your comment, let NOSB and USDA know that the approval of synthetic materials in organic cannot be governed by the weak process that was just adopted on September 17. Incorporate some version of the following in your comments:

Because the National Organic Program (NOP) sunset policy violates OFPA, and will therefore not subject National List materials to the required reassessment to determine re-listing in the future –and given current concerns about health and environmental impacts associated with the petitioned materials’ use and manufacture and synthetic materials under sunset review, as well as their need in organic production (essentiality), we urge NOSB members to oppose petitions for new synthetic chemical uses at this Fall 2013 NOSB meeting and until the sunset process is reinstated. We are especially concerned about the lack of public transparency and input on all decisions related to organic and the long-term viability of the USDA organic label as consumers begin to increasingly distrust the process and the lack of NOSB authority to conduct a public assessment to determine whether materials should be relisted every five years.

Under the law, synthetic materials, which are “otherwise prohibited,” may be given an “exemption” by the NOSB to allow use, but only for five years if not extended by the NOSB. USDA has dismantled this process, in place since 2005, which was established to ensure that all synthetics are approved by the NOSB and subject to public comment on a five-year cycle. Once allowed, a material was required to sunset after that cycle and would not be put back on the allowed materials list, the National List, unless the Board voted decisively (two-thirds) to reinstate or continue the use --a high threshold in line with the law’s default against synthetics and the standard required for newly petitioned substances. Under the new process, the Board does not have to act to continue a use, creating disincentives for the development of natural alternatives or alternative practices, and the decision could be made by USDA without a NOSB recommendation or public comment.

The organic label has value in the marketplace because it was built on a system of land management, certification, and the close public scrutiny of allowed inputs through a public process and oversight of a stakeholder group, the NOSB.

Why is this attack coming from USDA now?
While USDA claims these moves will increase efficiency and transparency, we believe that they will do just the opposite, resulting in less public oversight and the use of synthetic materials in perpetuity, thereby creating disincentives for continuous improvement. The USDA action comes on the heels of many critical votes by the NOSB to curtail antibiotics, stop synthetics in infant formula, place restrictions on nanotechnology, scrutinize inert ingredients, protect organic farmers from contamination by genetically engineered crops, and increase public involvement and oversight. Are there some in the industry (or wanting to break into the organic industry) who think this oversight of organic is harmful to its growth? Or, is the new policy's disincentive for continuous improvement, which historically has been advanced by the NOSB and the public, actually harmful to the growth of organic? Make your voice heard.

Here's what we can do: Please take the time to submit a personalized comment on as many issues as possible. We made the process easy - go to Beyond Pesticides’ Keeping Organic Strong webpage. What we eat and how we protect the environment has very personal impacts on us, so let’s take the time to let the NOSB know what we think.

Thanks for being an organic supporter.