Western Bumblebee Declines a Result of Pesticides and Climate Change, No End in Sight
January 25, 2023 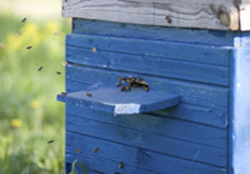 The decline in honeybee populations has received increased attention from researchers and regulators. In 2007, the National Academy of Sciences National Research Council’s (NRC) “Status of Pollinators Committee” issued the findings of a two-year study detailing the serious problems facing the beekeeping industry, which was described as being in crisis mode. The U.S. Environmental Protection Agency (EPA), U.S. Department of Agriculture (USDA) and other federal agencies are tasked with collaborating on addressing pollinator health, but environmentalists and beekeepers don't believe they are doing enough.

In 2014, the Pollinator Health Task Force, established by President Obama, brought together most federal agencies to “reverse pollinator losses and help restore populations to healthy levels,” and involved developing a National Pollinator Health Strategy and a Pollinator Research Action Plan. The Strategy outlined several components, such as a focus on increased pollinator habitat, public education and outreach, and further research into a range of environmental stressors, including systemic neonicotinoid pesticides. However, it ultimately worked at cross-purposes by continuing to allow pesticides that contaminate landscapes.

A 2016 U.S. Government Accountability Office (GAO) report found that government agencies were falling short in their efforts to protect honey bees and other wild pollinators from catastrophic declines. The report advised EPA to develop a plan to assess pesticide risks to a range of bee species beyond honey bees.

Meanwhile, EPA continues to review the neonicotinoid class of pesticides linked to pollinator declines. A decision on their continued use is not expected until 2019.