Despite Damning Scientific Evidence, EPA Dismisses Link Between Parkinson's and Exposure to the Herbicide Paraquat
October 17, 2019

New Developments in the Link Between Parkinson's and Pesticides
December 20, 2018

USDA Reports Pesticide Residues on Over Half of Food Tested
December 23, 2014

Flight Attendant Links Airline Insecticide Use to His Parkinson’s
December 10, 2013 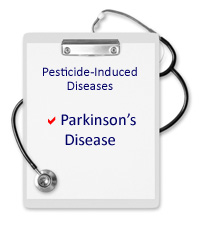 The second most common neurodegenerative disease, Parkinson’s disease (PD) occurs when nerve cells in the substantia nigra region of the brain are damaged or destroyed and can no longer produce dopamine, a nerve-signaling molecule that helps control muscle movement. People with PD have a variety of symptoms including loss of muscle control, trembling and lack of coordination. They may also experience anxiety, constipation, dementia, depression, urinary difficulties, and sleep disturbances. Over time, symptoms intensify. At least one million Americans have PD and about 50,000 new cases are diagnosed each year. With less than one percent of cases caused by genetics, researchers have been looking for the potential risk factors for developing Parkinson’s disease (PD). The epidemiological and toxicological evidence is repeatedly identifying exposure to pesticides, as well as specific gene-pesticide interactions, as significant adverse risk factors that contribute to PD. See Beyond Pesticides' Parkinson's Disease article from the Spring 2008 issue of Pesticides and You.