This year, December 11th marks the beginning of Hanukkah, the Jewish holiday known as the “Festival of Lights.” Hanukkah is a time for lighting the menorah, spinning the dreidel, eating good food, and spending time with loved ones—not a time for toxic chemicals to be making their way into your family’s holiday food. 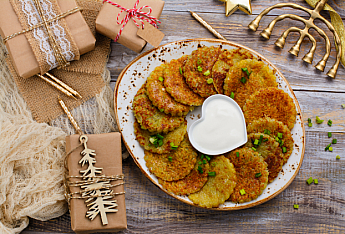 Latkes, or potato pancakes, served with apple sauce are the traditional food eaten on Hanukkah. But both potatoes and apples are foods that are typically high in pesticides. According to Beyond Pesticides’ Eating with a Conscience database, potatoes that are grown with toxic chemicals show low pesticide residues on the finished commodity, however, there are 78 pesticides with established tolerance for potatoes, 30 are acutely toxic creating a hazardous environment for farmworkers, 69 are linked to chronic health problems (such as cancer), 17 contaminate streams or groundwater, and 70 are poisonous to wildlife. Potatoes have been found to contain residues of the pesticides thiabendazole, endosulfan, and aldicarb —all 3 of which are hazardous, especially to children.

Similarly, there are 109 pesticides with established tolerance for apples, 38 are acutely toxic, creating a hazardous environment for farmworkers, 91 are linked to chronic health problems (such as cancer), 14 contaminate streams or groundwater, and 91 are poisonous to wildlife. Apples may have residues of chlorpyrifos, an organophosphate so dangerous to children that it was banned in homes, as well as 2,4-D, an herbicide with wide-ranging reproductive and neurotoxic effects.

While not all the pesticides listed in the Eating with a Conscience database are applied to all potatoes or apples, there is no way to tell which pesticides are applied to any given piece of conventional produce on your store shelf. You may consider talking to the farmers at your local farmers’ market about the pesticides they use, but eating organic is the only way to know for sure.
A recent American Academy of Pediatricians (AAP) report, “In terms of health advantages, organic diets have been convincingly demonstrated to expose consumers to fewer pesticides associated with human disease. Organic farming has been demonstrated to have less environmental impact than conventional approaches.” This was followed by a landmark policy statement and an accompanying technical report on the effects of pesticide exposure in children, which notes that, “Children encounter pesticides daily and have unique susceptibilities to their potential toxicity.” Organic foods have been shown to reduce dietary pesticide exposure and children who eat a conventional diet of food produced with chemical-intensive practices carry residues of organophosphate pesticides that are reduced or eliminated when they switch to an organic diet.

Beyond Pesticides advocates in its program and through its Eating with a Conscience website choosing organic because of the environmental and health benefits to consumers, workers, and rural families. The Eating with a Conscience database, based on legal tolerances (or allowable residues on food commodities), describes a food production system that enables toxic pesticide use both domestically and internationally, and provides a look at the toxic chemicals allowed in the production of the food we eat and the environmental and public health effects resulting from their use. For more information on the benefits of organic agriculture, see Beyond Pesticides’ Organic Food program page.

This Hanukkah, protect your family and go organic.

Cut scrubbed, peeled organic potatoes into chunks—three cups’ worth. For 3 cups’ worth of spuds, use:

In the food processor blend ¾ of potatoes with all ingredients. Add remaining potatoes using a shredder blade.
Pour onto hot, well-greased griddle; turn when edges are brown and middles bubble slightly.