With Decision on Insecticide, EPA Betrays Protection of Pollinators. . .Again
May 9, 2022

Fungicide Found to Jeopardize Male Pollinator's Ability to Find a Mate, as EPA Ignores Risk
May 3, 2022

Literature Review Adds to the Growing Evidence that Inert Ingredients Are Toxic to Pollinators
April 21, 2022

With pollinators responsible for over 80% of the world's flowering plants, it's no wonder we are fighting to protect them. Without their services, crops like blueberries, almonds, and apples would be suffer, increasing costs and impacting our diets as we know it. Pollinators like birds, bees and butterflies are commonly known for their role in pollination, but did you know that bats and beetles are also pollinators?

You should be aware that you can play a role in protecting pollinators simply by making an organic garden, pledging it as pollinator friendly, or even organizing your community, schools, or local government to make choices that foster pollinators. Here we have developed a brief introduction to pollinators, so that when you do create your pollinator friendly landscapes you’ll know just what to expect. 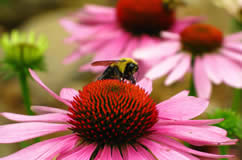 There are a plethora of different bees, over 4,000 species native to North America alone. From honeybees and bumblebees to carpenter bees and sweat bees, these pollinators prefer flowers that are white, yellow or blue with a fresh, mild or pleasant odor, and large landing pads for petals. 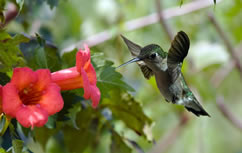 Hummingbirds are perhaps the most common bird pollinator in North America. Other birds that provide pollinator services include the wood thrush, the Cerulean warbler, and the Eastern Cuckoo. Regardless, flowers most frequently visited by birds and hummingbirds tend to be brightly colored scarlets, oranges, reds or whites, that are odorless, and have tubular shapes so they can make use of their long beaks. As birds dip their noses into the nectar-filled flower, particles of pollen will attach to their feathers, ensuring that the pollen will be carried to another flower of the same species. 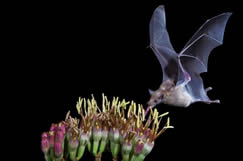 The oft-forgot bat pollinators are integral for night blooming flowers and crops: some of the most important crops include avocadoes, guava, and wild bananas. They are attracted to dull white, green or purple flowers with a strong musty odor. Two species of bat are considered major pollinators in the Southwest, the Lesser Long-Nosed bat among them. Similar to birds, bats are a vector for pollen as granules become attached to hairs of their fur. 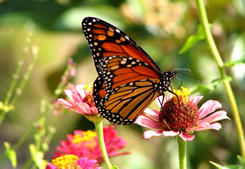 Butterflies, including the Monarch pictured here, seek nectar during the day time, while moths are their nocturnal counterparts. Both are attracted to bright red and purple flowers, but while butterflies prefer fresh scented flower, moths prefer strongly scented ones. 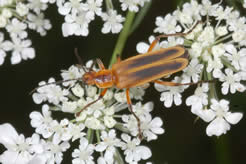 Beetles, like this soldier beetle, provide important pollinator services. To give you some idea of scale, over 40% of all insects are beetles. They tend to visit white or green flowers with wide, shallow, and bowl-like shapes.