With Global Disease Rates Rising, Do Pesticides Take Some of the Blame? Science Says, “Yes.”
September 15, 2022 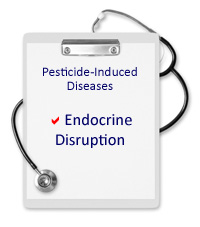 Common household products–detergents, disinfectants, plastics, and pesticides–contain chemical ingredients that enter the body, disrupt hormones and cause adverse developmental, disease, and reproductive problems. Known as endocrine disruptors, these chemicals, which interact with the endocrine system, wreak havoc in humans and wildlife. The endocrine system consists of a set of glands (thyroid, gonads, adrenal and pituitary) and the hormones they produce (thyroxine, estrogen, testosterone and adrenaline), which help guide the development, growth, reproduction, and behavior of animals, including humans. Hormones are signaling molecules, which travel through the bloodstream and elicit responses in other parts of the body.

Endocrine disruptors function by: (i) Mimicking the action of a naturally-produced hormone, such as estrogen or testosterone, thereby setting off similar chemical reactions in the body; (ii) Blocking hormone receptors in cells, thereby preventing the action of normal hormones; or (iii) Affecting the synthesis, transport, metabolism and excretion of hormones, thus altering the concentrations of natural hormones. Endocrine disruptors have been linked to attention deficit hyperactivity disorder (ADHD), Parkinson’s and Alzheimer’s diseases, metabolic disorders diabetes, cardiovascular disease, obesity, early puberty, infertility and other reproductive disorders, childhood and adult cancers, and other metabolic disorders.