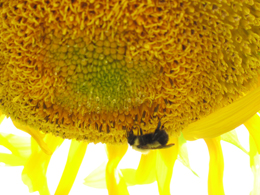 “Organic farming is not simply the substitution of approved input materials. It is the replacement of a treatment approach with a process approach to create a balanced system of plant and animal interactions.”
—Rodale Institute

Climate - the challenges ahead for farming and the organic contribution
Carbon sequestration - no-till organic and soil carbon sequestration, plus the problem with chemical-based no-till
Ecology - the ecological dangers of chemical use and the hope for organic agriculture

Climate change presents challenges for farmers in all parts of the world. Conventional agricultural practices have contributed to climate change through heavy use of fossil fuels--both directly on the farm and in the manufacturing of pesticides and fertilizers--and through degradation of the soil, which releases carbon. The depletion of soil organic carbon (SOC) through conventional farming has not only released carbon into the atmosphere, it has also limited the fertility and water holding capacity of soils worldwide.

The adoption of organic methods, particularly no-till organic, is an opportunity for farming both to mitigate agriculture's contributions to climate change and to cope with the effects climate change has had and will have on agriculture.Good organic practices can both reduce fossil fuel use and provide carbon sequestration in the soil through increased soil organic carbon (SOC). Higher SOC levels then increase fertility and the soil's ability to endure extreme weather years. Organic agriculture relies on non-chemical ways of maintaining fertility, managing pests and controlling weeds, thus eliminating the need for synthetic fertilizers and toxic pesticides.

Research from the Rodale Institute’s Farming Systems Trial® (FST) has revealed that organic, regenerative agriculture actually has the potential to lessen the impacts of climate change. This occurs through the drastic reduction in fossil fuel usage to produce the crops (approximately 75% less than conventional agriculture) and the significant increase in carbon sequestration in the soil.

The no-till organic methods they have developed produce comparable yields to conventional systems on average, and higher yields in drought years because of the greater water holding capacity of the organic soils. 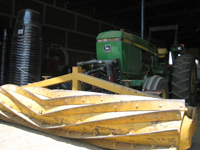 The Problem with Chemical-Based No-Till

Much of agriculture relies on tillage, or the turning of soil. This process has the benefits of aerating the soil, reducing weeds, incorporating crop matter, and warming the soil. However, tillage can hurt soil aggregation properties, and lead to erosion by wind and water. No-till agriculture is becoming more and more prevalent in conventional agriculture, but while it has been heralded by some as more environmentally friendly, it relies on the use of toxic herbicides. Chemical-based agricultural practices have contributed to climate change through heavy use of fossil fuels–both directly on the farm and in the manufacturing of pesticides and fertilizers–and through degradation of the soil, which releases carbon. The herbicide use that conventional no-till depends on, is no exception.

Furthermore, USDA research shows that chemical-based no-till just isn't that effective at sequestering carbon. A 2006 study, “Tillage and soil carbon sequestration what do we really know?,” led by a USDA Agricultural Research Service (ARS) soil scientist, concludes, “Though there are other good reasons to use conservation tillage, evidence that it promotes carbon sequestration is not compelling.” On the other hand, a long-term ARS study, "No Shortcuts in Checking Soil Health," finds that organic farming practices build soil better than chemical no-till and have more soil carbon, as well as better crop yields. 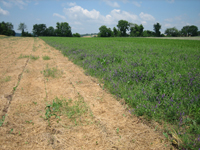 The adoption of organic methods, particularly no-till organic, is an opportunity for farming both to mitigate agriculture’s contributions to climate change and cope with the effects climate change has had and will have on agriculture.

Organic no-till agriculture incorporates cover cropping as a critical component to the system that adds both nutrients and a weed barrier in the form of mulch. In a no-till organic system, a cover crop such as hairy vetch is planted in the early fall on a field. In late spring, as soon as this vetch has flowered, a single tractor equipped with both an implement to knock down the vetch (photograph above) and an implement to seed another crop (corn, for example), passes through the field. Bacteria associated with the vetch, because it is a legume, add nitrogen to the soil, providing the corn with enough to grow and eliminating the “need” for nitrogen fertilizer. The vetch provides a mulch (side photo) so weeds cannot compete with the corn, and the “need” for herbicides is nonexistent. This is particularly important in light of the predictions that increased CO2 in the atmosphere will lead to faster weed growth.

At Rodale, experiments with this no-till organic system are revealing the immense benefits of combining the no-till approach with cover cropping. Both the water holding capacity and the water drainage capacity increase with this system because of the greater soil aggregation and organic matter content. The increased humus (organic matter [carbon] that is in a very stable form) in the soil provides carbon sequestration. A crop’s ability to deal with weather extremes is increasingly important in this era of climate change and this ability is directly related to the soil health. Solutions to dealing with changing weather patterns should focus on soil health as this does, not on the development of genetically modified “drought-resistant” plant varieties. This system holds promise not only for grains, but for transplanted vegetables as well.

For a more thorough discussion of the experiments at Rodale, please read Dr. Paul Hepperly’s article, "The Organic Farming Response to Climate Change" in Pesticides and You and the Rodale Institute’s "Regenerative 21st Century Farming: A Solution to Global Warming", which elaborates on the amount of carbon sequestration possible with organic, no-till agriculture.

For more on the Rodale Institute’s work on climate change, visit their global warming page.

Pesticides, by their very nature, kill things. One of the problems with the widespread use of toxic, synthetic pesticides is that they often kill not only the desired target of the application, but other species as well. This threatens species diversity, particularly endangered species.

Besides killing non-target organisms, many of these synthetic pesticides have deleterious effects on long-term species survival because they impair their reproductive abilities. Endocrine disrupting pesticides affect the hormonal balance of wildlife and humans, often at very low doses (for more information on endocrine disruption, please read the spring 2008 volume of Pesticides and You, and for information on low dose effect please read an excerpt from Dr. Warren Porter's presentation from 2007). One very common herbicide, atrazine, has been linked to serious deleterious effects on the reproduction of frogs (for more information, read Dr. Tyrone Hayes's 2004 article in Pesticides and You). There are numerous examples of the ecological devastation caused by pesticide use. Organic agriculture does not use these chemicals, and therefore eliminates a significant source of toxic chemical contamination in our environment.

Given that we have to eat, and in order to feed over 6 billion people on the planet we have to have agriculture, it is imperative that agriculture be ecologically sensitive. Good organic practices work to build the soil and maintain an ecological balance so that chemical fertilizers and synthetic pesticides are proven unnecessary. Claims that organic agriculture cannot feed the world because of lower yields are contested by scientific studies showing that organic yields are comparable to conventional yields (read abstract) and require significantly lower inputs. Therefore, organic agriculture is not only necessary in order to eliminate the use of toxic chemicals, it is necessary to ensure the long-term sustainability of food production.