Pesticide Use in Marijuana Production: Safety Issues and Sustainable Options

Update, 7/14/2015: Beyond Pesticides Notifies State of Colorado of Illegal Pesticide Use on Cannabis Crops; Proposes Alternative Approach that Complies with State and Federal Law. Read the letter here.

Washington, DC, March 11, 2015 – Marijuana may be legal in your state for medicinal and recreational use, but are toxic pesticides used in its production? A study released today of the 23 states and the District of Columbia that have legalized marijuana finds a patchwork of state laws and evolving policy that define allowed pesticide use and management practices in cannabis production. This variety of state law is occurring in the absence of federal registration of pesticide use for c 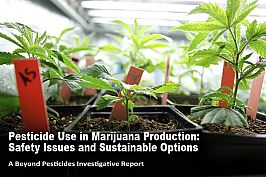 annabis production because of its classification as a narcotic under federal law. The investigation, Pesticide Use in Marijuana Production: Safety Issues and Sustainable Options, evaluates the state laws governing pesticide use in cannabis production where it is legalized.

“The use of pesticides in the cultivation of cannabis has health implications for those growing the crop, and for users who are exposed to toxic residues through inhalation, ingestion, and absorption through the skin,” said Jay Feldman, executive director of Beyond Pesticides. “The good news is that five states and DC have adopted rules that require marijuana to be grown with practices that prevent the use of pesticides. State officials have an opportunity to restrict all pesticide use at the front end of a growing market, require the adoption of an organic system plan, and set a course to protect health and the environment,” Mr. Feldman continued. The USDA certified organic seal will not be found on marijuana products because of their federal status.

Typically, when a pesticide is used in crop production, it is evaluated for the specific use site and assessed for its potential adverse impact on health and the environment. The federal government in the case of cannabis cannot conduct its normal registration review for this use, given the crop’s illegal federal status. Many have incorrectly assumed that, since there are no federal pesticide registrations for marijuana production, all pesticide use is illegal, except those materials that are exempt from federal registration. States are required under federal law to only permit pesticides registered or exempt by the U.S. Environmental Protection Agency (EPA).

The study raises safety concerns due to loopholes in federal law. For example, recently EPA told the states that while marijuana does not fit into any general group, such as an herb, spice, or vegetable, “[I]t may be legally used on marijuana under certain general types of crops/sites when there is an exemption from tolerance” (allowable pesticide residues in food set by EPA). The agency has said that broad spectrum herbicide and fumigant use outdoors is allowed under certain circumstances. This use pattern, according to the study, raises issues of pesticide uptake into crop and environmental impacts.

The report identifies six states that have legalized marijuana but are silent on pesticide use in its production and raises questions of compliance. It recommends in those states with legalization the adoption of laws governing cannabis production that prohibit federally registered pesticides and require the adoption of organic practices that only allow products exempt from registration based on the full range of possible exposure patterns.

The study can be found here.

Update: California recently introduced new guidelines for pesticide use on cannabis. See Beyond Pesticides' Daily News for an overview of the new rules.

See this chart for a comprehensive overview of state pesticide regulations to date. 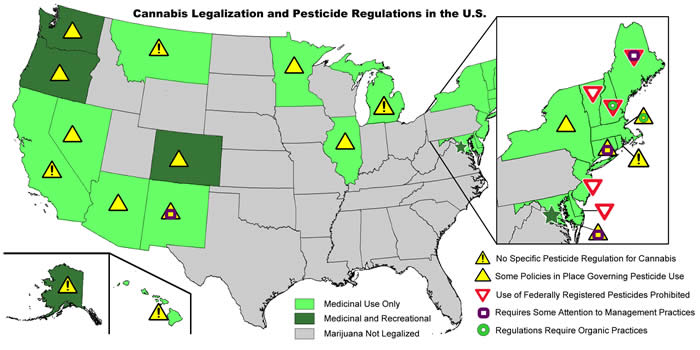