European Union Plans to Propose a 10-year Extension for the Approval of Glyphosate Use
May 19, 2017

Exposure to Pesticides Linked to ALS Risk
May 16, 2016

Another Study Links Depression in Farmers to Pesticide Use
October 15, 2014 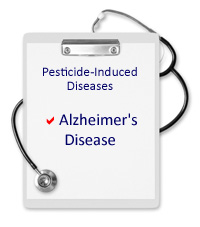 According to the Alzheimer’s Association, Alzheimer’s disease (AD), the most common form of dementia, is a progressive and fatal brain disease. As many as 5.3 million Americans are living with Alzheimer’s disease. Alzheimer’s destroys brain cells, causing memory loss and problems with thinking and behavior severe enough to affect work, lifelong hobbies or social life. Alzheimer’s gets worse over time, it is fatal, and has no current cure.